For the first time in the history of the WNBF, the World Championships was hosted on the West Coast!  Tina, Bob, Nancy, INBF promoters, and the support staff did an incredible job with every aspect of the show!  We Thank You All Once Again!!  Extra Special Thanks to Cellucor for their corporate partnership and for supporting our competitors, promoters, and events throughout the country!

Athletes traveled from all over the World to compete in Los Angeles, California.  The event location and venue was convenient which allowed many to travel to L.A. Fitness and Gold’s Gym in Venice “The Mecca” of bodybuilding! Many competitors and WNBF Affiliates had the opportunity to meet “The Oak” himself, Arnold Schwarzenegger!  Arnold knows the WNBF!

Jump to a Section

Pro Women’s Bodybuilding is alive and well in the WNBF with 2 pro classes at this years Worlds. The classes were filled with new and veteran competitors.  Both classes had World title holders in them but this year, the title went to a woman making her WNBF Worlds debut The Polynesian Sensation Lisa Lum. 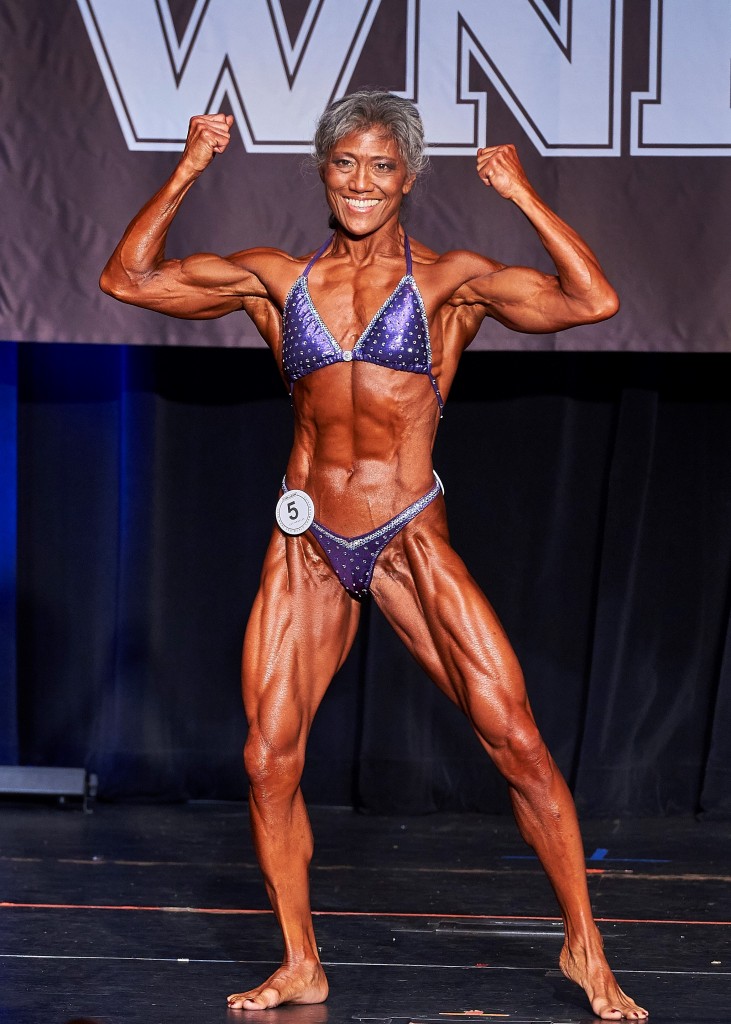 Lisa began her 2016 winning streak at the INBF Washington State Natural, and she went on to win the WNBF Pro USA in Sacramento as well.  Lum faced a very tough 2-time light weight and reigning Overall World Champion Irhassette McClean in the overall at Worlds.  Although Irhassette was in peak form, Lisa edged her out to seize the World Title.  Lum and McClean had similar condition but Lisa had more overall size and in bodybuilding muscle size matters. Both are great champions!

In third was Angela Olson of California.  Angela has great muscularity but needed to be harder if she was going to beat Lum and McClean. 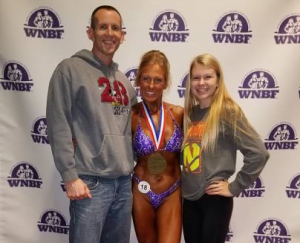 In the heavy weight division we saw the return of 2014 Pro Worlds Overall Champion Cathy Vail.  Cathy is always a contender when she steps on stage, and she was able to pull off another west coast victory in LA.

Bridgett gained 3 first place votes and Cathy 4. Finishing in the 3rd position was Laurie Coe of Massachusetts. This RN took ten years off to have a family and she is back to competing with the best of the best! In her first year back she wasted no time winning the Pro Monster Mash, she snatched the runner up spot at the Pro American, and 3rd place in Los Angeles.

In 4th place another comeback story was Candace Hatch. Candace also won the WNBF Pro American this year. This Wisconsin native used her time away from competing to build a lot of natural muscle.

Yvette Arthur of England took the final 5th spot in her Worlds Debut.

In the overall, it was Vail with one of the most symmetrical physiques you will ever see, and Lisa Lum who was not only symmetrical but hard as a rock! Lum got the nod in the end from the judging panel because of her her superior condition and overall muscle separation.

We look forward to seeing most of these ladies back in 2017 in Boston! 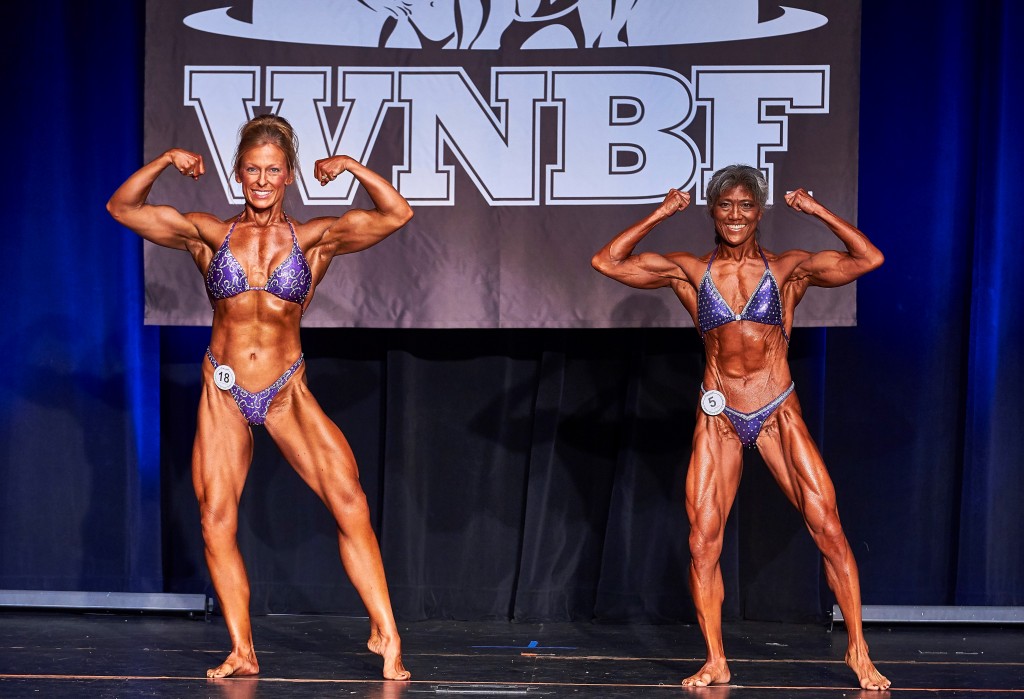 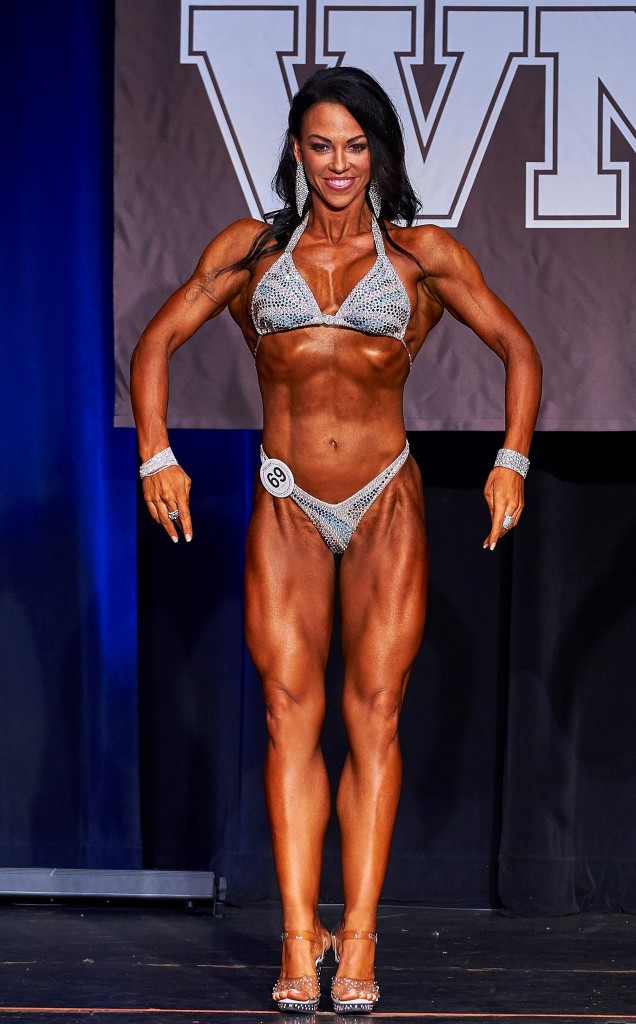 Heather Drake came back to win her third WNBF Pro Figure Tall Championship and her second overall.  Drake won the class based on a well balanced physique, enough condition and the best overall package of the group.

The short class winner was Jenn Kamienski. This was Jenn’s first ever Worlds and in her debut was able to pull off a huge win. Both ladies represented well and epitomized what pro figure should look like: beautiful, well balanced, and perfect stage presentation. 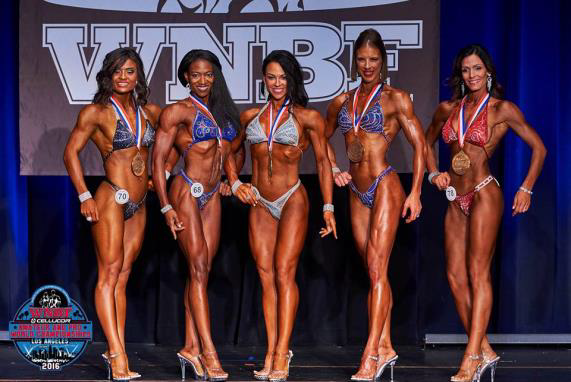 The runner up was LaTonda Barber in 3rd.

Chrissy Zmijewski from Sacramento made a comeback this year and showed that she belongs in the top 3 at any event.

In 4th was Edna Ferrer from Los Angeles who won her pro card at the INBF LA in 2016.

Rounding out the top 5 was Randi Preis of Maine who came off a huge win at the Pro Master’s American in Mass. 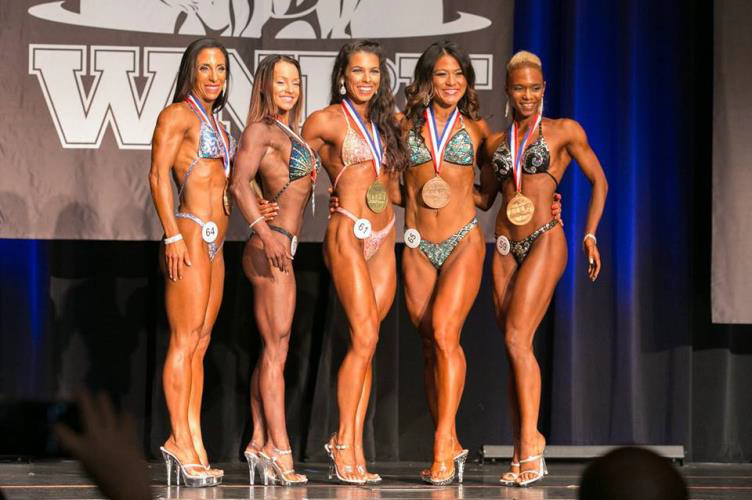 Angelica Vlahos pulled off her second Worlds finishing in 3rd, this year as a short competitor and last year as a tall.  Angelica brought a very athletic physique with the sass of a winner on stage.

Stacy Theofilopoulos had a goal for 2016 which was to place in Worlds.  After not making the top 5 in 2015, this goal became a reality as she finished 4th in L.A.

5th and final placement was well earned by Shalom Gause. Shalom has competed in WNBF Pro events for a number of years and continues to improve year after year.

Both pro figure classes were deep in talent to say the least!  Figure is a class where we see lots of new interest from upcoming competitors from across the World.  We are looking forward to seeing what 2017 will bring for INBF Amateur and WNBF Pro Figure! 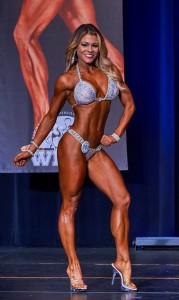 Leigha Hervey went into the 2016 World Championships as the reigning two time World Champion and came out victorious yet again.  Leigha has quite a record with the WNBF and is the only World Champion in the history of WNBF Pro Bikini.  Hervey won her first title in 2014.

Giving Leigha a run for 1st was new WNBF Pro Lisa Berney.  Lisa made her pro debut at Worlds this year after winning her pro card through new Australian Affiliate the AWNBS.

Pushing for 3rd place was LA’s own Jennifer Whelan from Foothill Gym in Monrovia, CA.

Finishing out the top five was Amelia Towle placing 4th, and Carly Gonzalez in the 5 spot.

This years pro bikini class was very deep with competitors from around the World. 2017 will certainly be a great year for Pro Bikini! 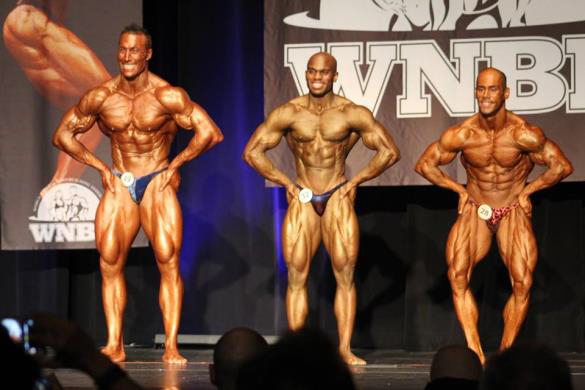 Men’s Bodybuilding at the WNBF World Championships has always brought top contenders from around the world!  2016, was one of the most exciting Worlds with deep competition in all three weight classes.  Lightweight competitors weighed in at 157 lbs. and lighter.

The winner by unanimous first place scores was Martin Ortiz.  Martin came in sharper than ever and used his size to overpower all of the other lightweight competitors in his class.

Thomas Rausmussen of Denmark improved his physique  this past year to move up one spot from 2015.

The middleweight class ranged in weight from 158 up to 185 lbs. The class was loaded with talent as well.  The top two were so close they split first place votes in a 4-3 decision.

Pushing him on every pose was Valentine Ezhuga taking the runner up placing.

Our heavyweight class was huge and very well conditioned as always!  The top three all pushed extremely hard to win this muscular class.

The clear standout was WNBF Pro World Champion Richard Gozdecki of the UK!  His overall symmetry and muscularity made him a clear victor in the heavies!

Runner up this year was another UK Champion, Sam Watt.  It was impossible to not notice Watt’s shredded delts and his ultra developed back which were significant in placing 2nd.

Local So Cal sensation Bada Lekan aka Prince Bada from Nigeria placed 3rd this year.  It was a great year for Lekan as he won the WNBF Pro USA in Sacramento, and was also crowned Mr. Universe in New York City!

Clincing the 4 spot was new WNBF Pro out of Northern California, Overall Champion from the INBF Battle of the Bay Pierce Adams.  Adams is a seasoned competitor who found the INBF in 2015.

Rounding off the top 5 was the 2015 WNBF Pro Washington State Champion and WA state native Benny Mobley.  Mobley had symmetry and muscularity on a tall frame which always makes him a competitive heavy weight each and every time he steps on stage!!

The anticipation and excitement leading up to the overall was intense!  Not only for athletes and spectators, but for the entire judging panel as well! There was a huge difference in weight between Gozdecki, Ortiz, and Hunter.  As the competitors went through the symmetry round and mandatory posing, there was definitely no clear cut winner!

These three great champions had very different strengths, and you could not find a weakness from one to the next.  Gozdecki had incredible size and symmetry on a less defined physique, Hunter had great symmetry and deeply etched quads and striated glutes, and Ortiz presented size and condition on a smaller frame. If you were there you remember!

As the final scores came in, the first three scores were for heavy weight Richard Gozdecki.  We thought it was going to be unanimous!  The next four scores came in with Hunter’s number on them.

Ray Hunter is the 2016 Cellucor WNBF Pro World Champion….Hunter has captured the most prestigious World Title in all of Natural Bodybuilding!! 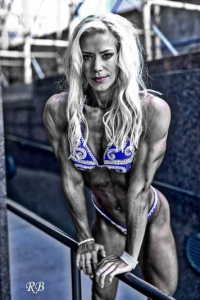 What a fall it was for Sophie Browne!  Sophie started off winning the Pro Universe in New York City, and the very next weekend she captures another W at Robert Fulton’s Pro US Cup in Connecticut.  But Browne wasn’t finished yet! The winnings continued as she captured another 1st place at the WNBF Pro Gaspari…..BUT ALL 3 wins were in figure!!

Sophie pushed her diet and training to another level, and went into the Pro Monster Mash as a Fit Body Pro and she came out victorious yet again!  It does not come as a surprise that she would win again at the Cellucor Worlds in LA! Sophie used her great structure, muscularity, and conditioning impossible to beat at Worlds.

Lise Ha Pham of Los Angeles had excellent condition to put her in the Runner-Up position in Pro Fit Body.

Kathy Clark of Australia’s AWNBS in her pro debut captured the top 5 spot! 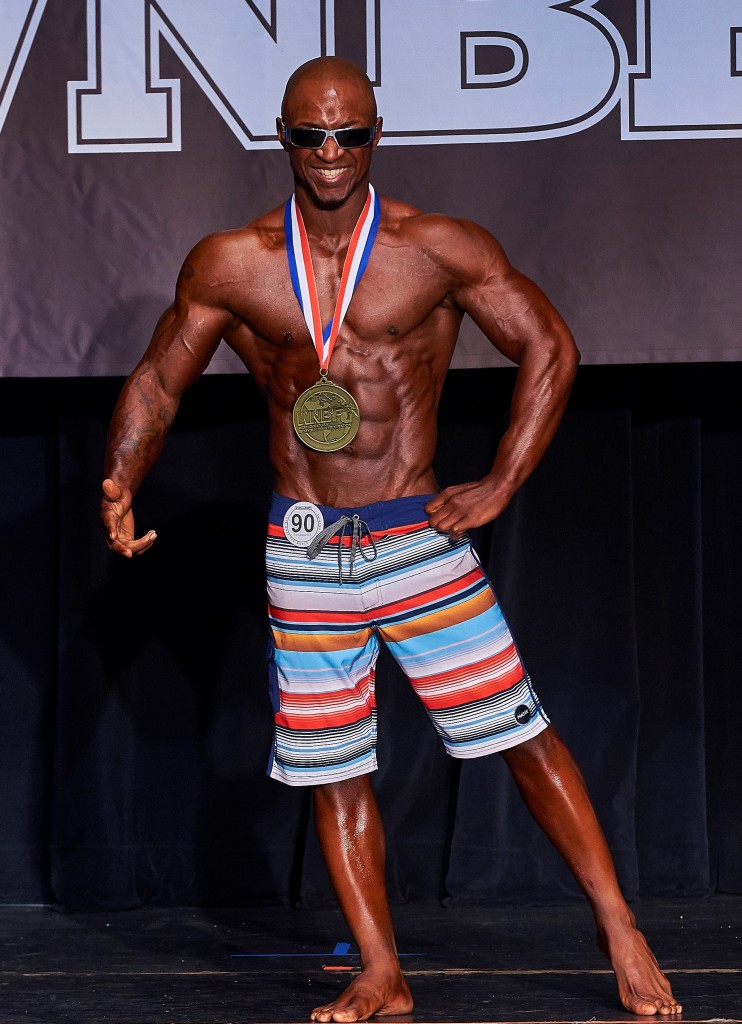 In our second Worlds featuring the Men’s Physique category a new Champion was Crowned.  The Proud young man from Puerto Rico, Melvin Ortiz landed in LAX in top form!

As the runner up to the 2015 WNBF World Men’s Physique Champion David Galan at the Universe in New York, Ortiz improved his overall condition and stage presence to uplift him over the rest of the pro competitors at the Cellucor Worlds in November!

And Yes…The new World Champ is wearing a pair of Gatorz Sponsored Eye Wear made right here in the USA!

David Galan clearly secured the 5th position.  The difference maker in this specific lineup was the balance of upper body muscularity, a small waist, and a symmetrical V taper from delts to obliques. 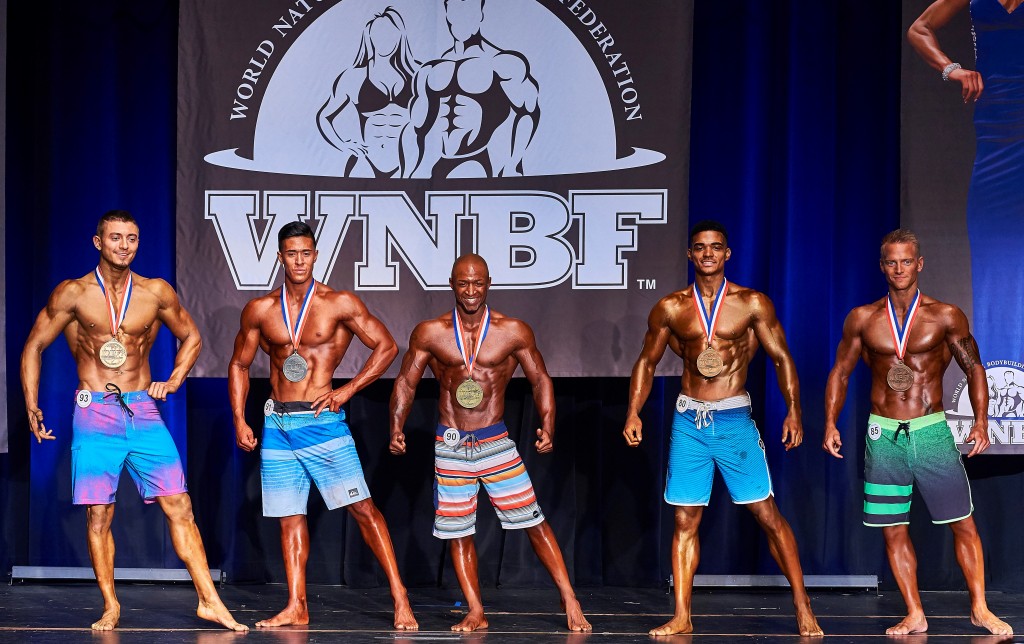 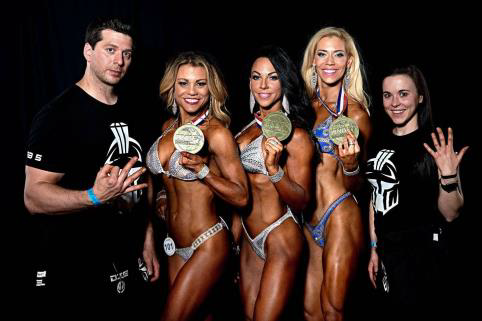 The INBF/WNBF is very happy to have so many trainers, prep coaches, and peaking specialists that support athletes and our events throughout the country, and we thank you all!  Ryan Sullivan of New York has been especially supportive to shows on the east coast, but he also brought a special team to the west to support the first ever WNBF Worlds in California!  Congratulations to Ryan and his Team, and those 3 WORLD TITLES!