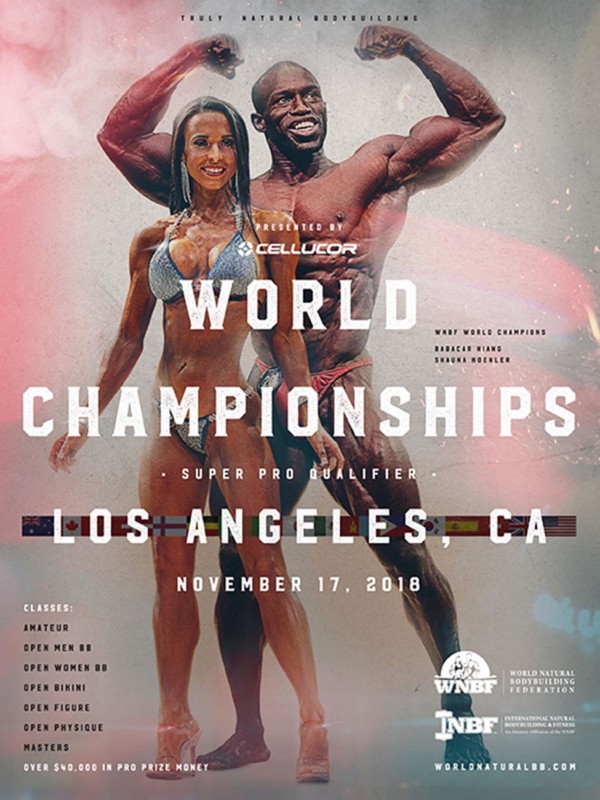 As the natural bodybuilding world looked at the 2018 schedule, many had their sights set on the 2018 WNBF World Championships in Los Angeles. The long year of training, dieting and competing often culminates with the Worlds. Los Angeles is the MECCA of bodybuilding, so it is no wonder that natural athletes

from 25 different countries would convene in LA for the SUPER Bowl of Natural Bodybuilding.

Bob Bell and Tina Smith had scouted out LA, and found a perfect home for the 2016 Worlds in Redondo Beach. 2017 brought us back to Boston where Nancy Andrews and Northeast promoters helped encourage athlete participation into Worlds in record numbers. The 2018 version of LA Worlds was even better planned with so many amenities for the athletes and fans. The 3 connected hotels, most with kitchens and easily accessible outdoor grills, are located close to the airport and 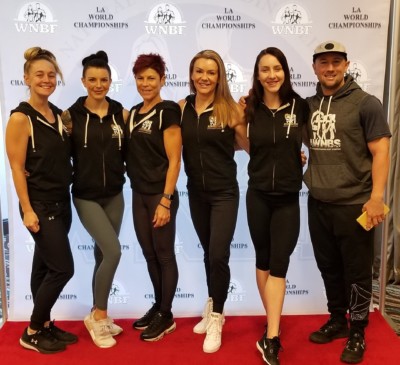 only 2 blocks from the beautiful Centinela Valley Center for the Arts. The WNBF was praised by hotel staff as the largest group they’ve ever had, and it really felt like a small village for natural bodybuilders. Many made it to Venice Beach and the iconic Golds Gym there with just a 15-minute drive. 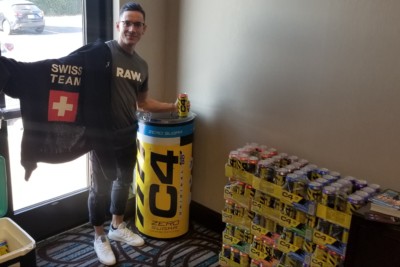 A sign-in board featuring all of the international affiliate logos, a red carpet for photos, California oranges, samples of Cellucor products, and WNBF clothing were featured in a large meeting space where athletes could also spend time together leading up to the event. The positive energy and enthusiasm in the room could be felt by all. The judges’ meeting also was held on Friday night with an extended agenda going over all categories in detail. This year, we had an international panel with several affiliates featuring their judges for the Worlds competition. 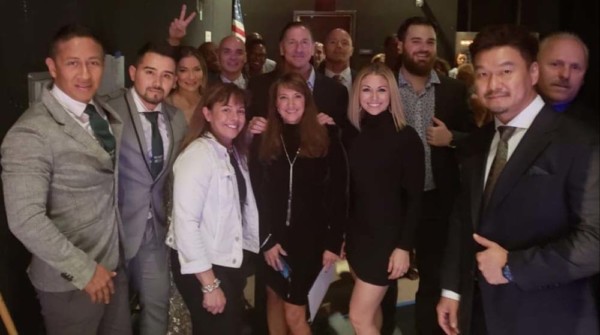 Saturday, November 17th at 8:00 AM, doors opened to a smiling staff comprised of California’s finest team along with many US promoters all with the mindset to make this day as special as it could be for all. Ian Mercer headed the expediting team with a large backstage area which was open, and competitors could mingle and then get studio photographs right off stage from “Better Aesthetics Bodybuilding”.

The show Began with Pro Women’s Bodybuilding. Class splits happen when there are at least 16 competitors. This year, we had only 13 women, so that made it a one class show. The 2016 WNBF World Champion Lisa Lum, Hawaii USA native came into this event very crisp and with great overall development. Her sharp leg separation from the front really helped to push her ahead of the reigning Overall and heavyweight winner from the USA in 2017, Candace Hatch. Candace had the best leg development and separation from the back, but that was not quite enough. Yvette Arthur was in the running in all rounds and finished third. Yvette traveled from the United Kingdom to compete as the 2018 Pro International Champion. She had a great total package and her best condition to date. Also from the United Kingdom, Danni Theresa, made her Pro Worlds debut after winning the 2017 Overall Amateur World title. She is definitely one to keep an eye on in the future. With a little better condition, she will move up quickly. And rounding out the top 5 was another international competitor, Jorun Morkore from the Faroe Islands. Jorun had great overall muscularity and definition for her smaller stature.

The Men’s weight classes were preset, and with 16 lightweights, the class was further divided for Bantam Weights. This class was super exciting as every person in the class came in top shape. As the competitors moved through the quarter turns, the judges had a taste of how difficult the task would be to rank these great bodybuilders. Returning to stage after an eight-year hiatus was USA’s Clement Yearwood who shocked the bodybuilding world with an overall win at the WNBF Pro Monster Mash two weeks prior. For LA, he dialed in even sharper, and with his tiny waist and great proportions, Clement was able to take the class. Runner up by just 1 point was Hawaii born and Oregonian Gerry Bernabe who pushed Clement in the muscularity round with a thick back, dense quads, and outstanding glutes and hamstrings, all ultra-defined. Mattia Zanutto of Italy came to win and battled for his third-place finish. He was thick everywhere, and offered a great overall package. The 2018 WNBF Pro Universe Champion, Jose Francisco Espinoza of the USA, showed off the best quad sweep in the class to gain fourth place. Rounding out the top five in his pro debut was Francisco Inzunza, California USA. Francisco has a very bright future ahead and definitely knows how to get in shape as his condition was spot on. 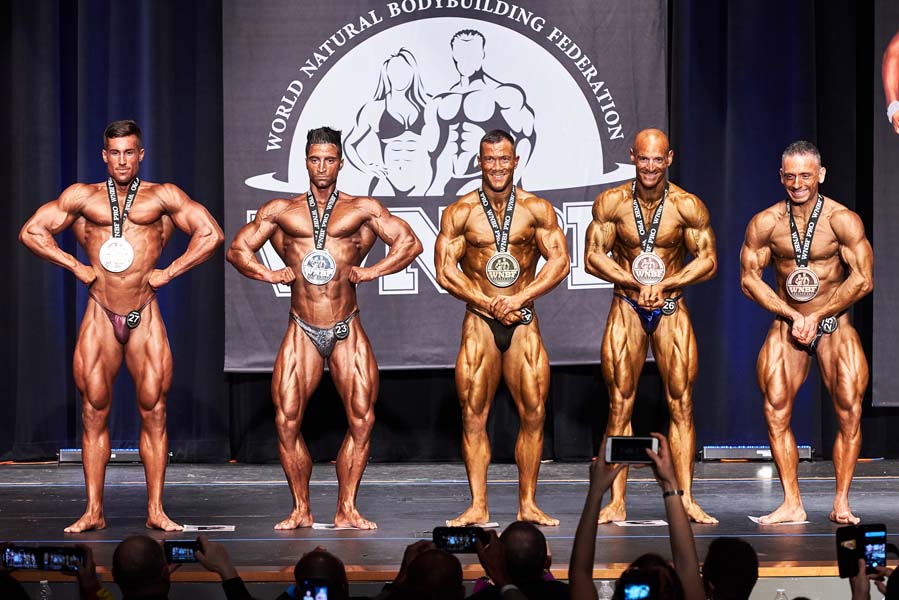 Our Pro Men’s Lightweight class was a total International win. First place went to Ben Howard of the UK who had just won the Pro International Overall title there, and he clearly demonstrated the best overall package. Italian Pro Matteo Petrucci is no stranger to a top 5 Worlds finish, and was runner up here by 1 point. Matteo poses with aesthetic beauty, and his physique is complete with hard muscularity throughout. Finishing third while receiving one first place vote, was Damian Lees from the UK. Damian shows big quads with exemplary detail.  In fourth was Adria Albiol Aviles coming off of a huge win at the WNBF Spain Championships, and with dominant size, he added a great finish for his pro debut. Fifth place went to Leonardo Casagrande of Italy who had nice symmetry and incredible quad sweep. 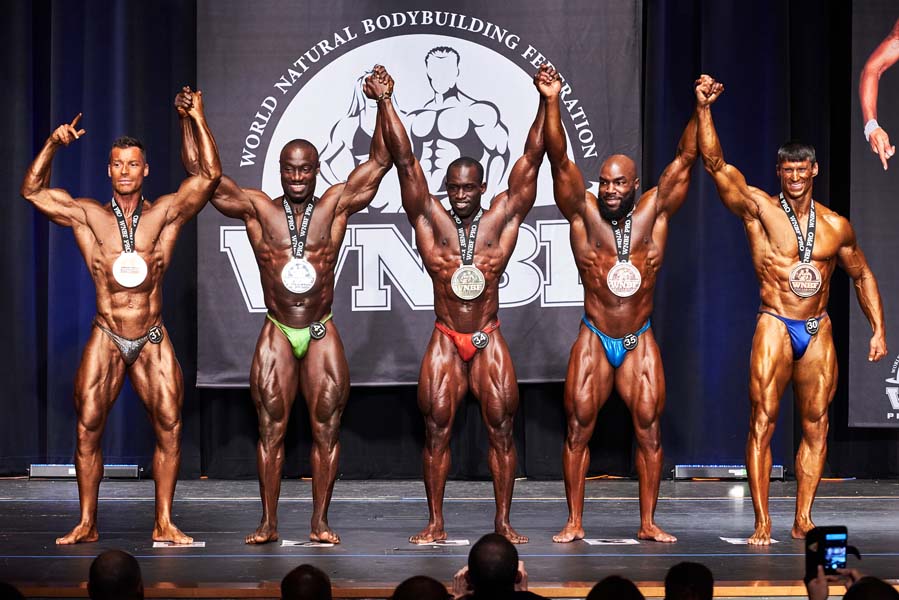 The Men’s Middleweight group was packed with talent and muscle! As the lineup came out on stage, the depth in this class was phenomenal, and it is no wonder that the winner of this class would go on to win the Overall. Reigning World Champion and winner of this class with unanimous first place votes was Babacar Niang from Italy. Babacar is so thick everywhere, and he possesses perfect symmetry. Pushing him at every pose was a similarly thick Bada Lekan of the USA via Lagos, Nigeria who made a middleweight cut for the first time. Lekan resides in LA and had great support in the crowd for this battle, but the physique Babacar brought to Worlds would not be denied. Haskell Cannonier of the USA had a strong showing in third with dense muscularity as well. From Italy, Alessandro Manfredi is always a finalist with a huge back, and great condition. The last finalist placement went to USA‘s Eric White, also with great size and huge biceps. 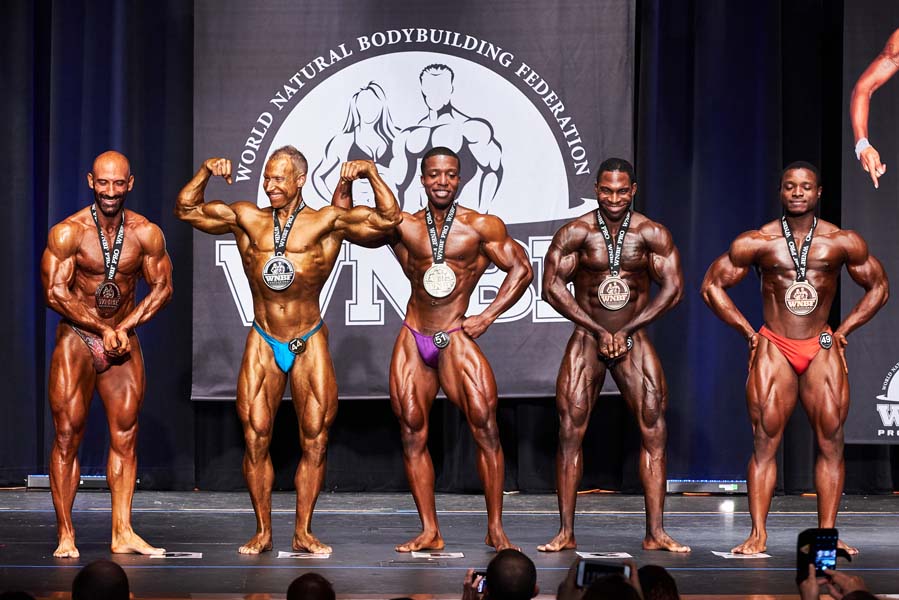 The Heavyweight class had one of the youngest ever WNBF Pro winners, Kendahl Richmond from the USA who used his great symmetry, and classic bodybuilding look of great lines to win this class. Watch out for this young man because in a few years he will be able to build even more dense muscle on his incredible frame. With a totally different look and lots of hard grainy muscle, Alastair Stewart from the UK finished second. Right in the mix and always a top finisher, was USA‘s Robert Peacock. Francesco Paleari of Italy had perhaps his best condition and solid posing for a strong fourth place finish. Our final placement went to Emmanuel Adejoh who recently earned Pro status with WNBF Germany and came to Worlds in his pro debut. Leaving with a fifth-place finish was super impressive in this class, and Emmanuel has perfect structure to improve upon. 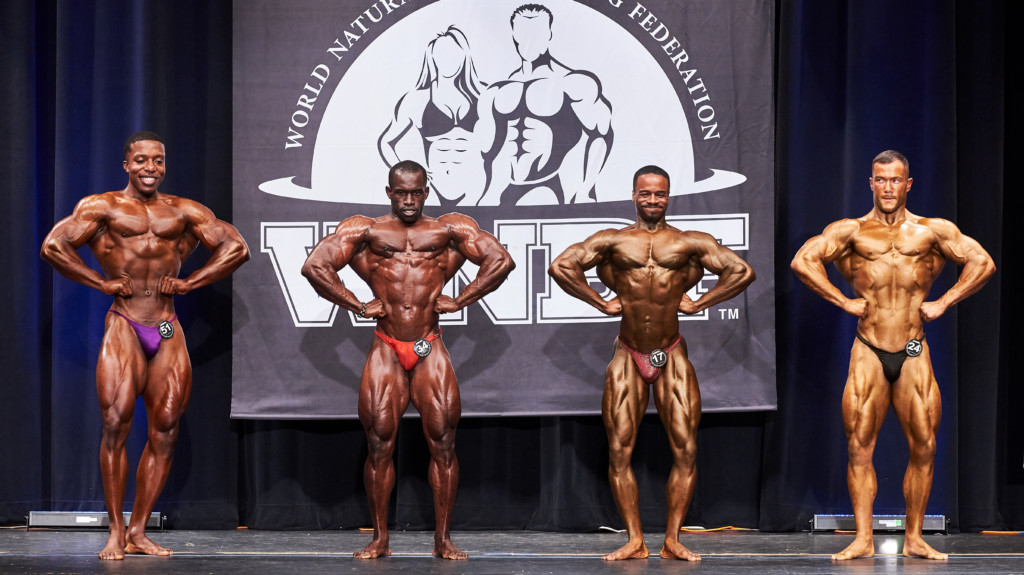 The overall left four great class World Champions but this day belonged to Babacar Niang. With unanimous votes, Babacar walked away as the number one natural bodybuilder in the World! We are all looking forward to seeing what he will bring in 2019! 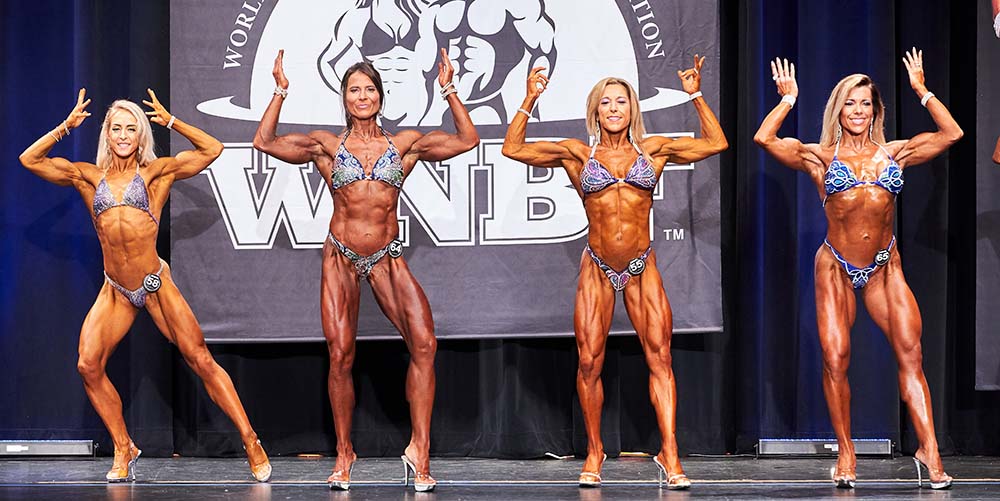 Pro Fit Body was our next class to the stage, and thirteen beautiful ladies displayed their muscularity. Three-time World Fit Body Champ from the USA, Tracy Rabbitt, was back hoping to claim her fourth title. Tracy Springer had other ideas on which Tracy would win though, and she did just that. Springer’s sharply defined legs, especially from the back helped the judges make their decision. Stephanie Collins of Ireland was the 2017 INBF Amateur World Champion, and she came to this Worlds in top form for her pro debut. Stephanie had a smaller stature, but her muscles were full, and her posing was the best in show to earn her a third-place finish. The INBF Granite State Open winner Cara Volpicelli of the USA showed strong muscularity as well in fourth. Finally, in fifth place was Canadian Melissa Vuckovic. Melissa had super condition and that helped her crack the top five. 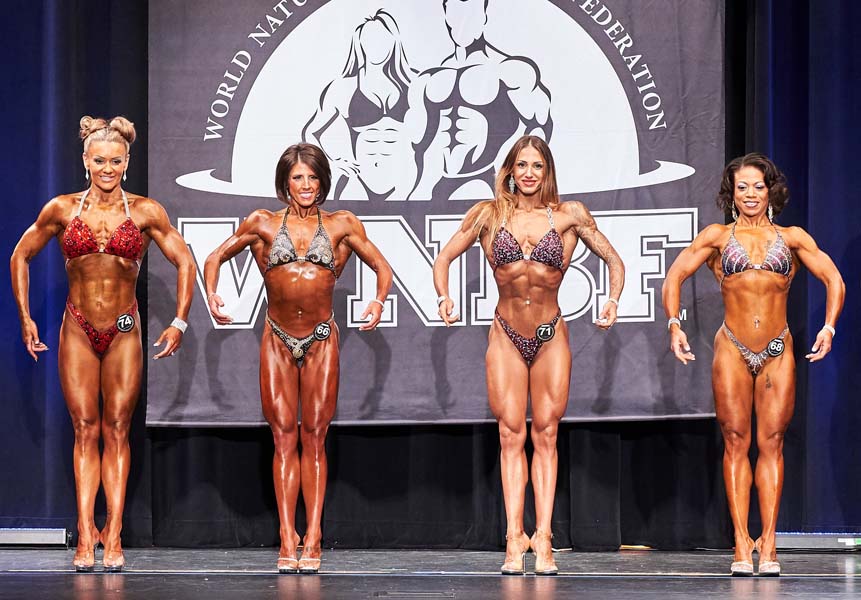 This year based upon competitor survey, we made the move to drop the evening gown for Pro Figure competitors. The short class had seven great athletes, but Lucrezia Sonzini of Italy dominated this class. She had great muscularity and condition for an overall look to unanimously win the class. Stacey McBride of the USA finished second with a solid showing and nice condition. In third from Australia, Sue Ann Smith made her pro debut and had lots of looks from the judges for her great symmetry and stage presence. Fourth place went to Antonella Ortis making her pro debut after winning the Italian Championships in October. Antonella looked poised on stage with shapely quads and nice definition. In fifth place was USA‘s Stacie Reed of Ohio who was solid in all areas, with nice shape and structure. 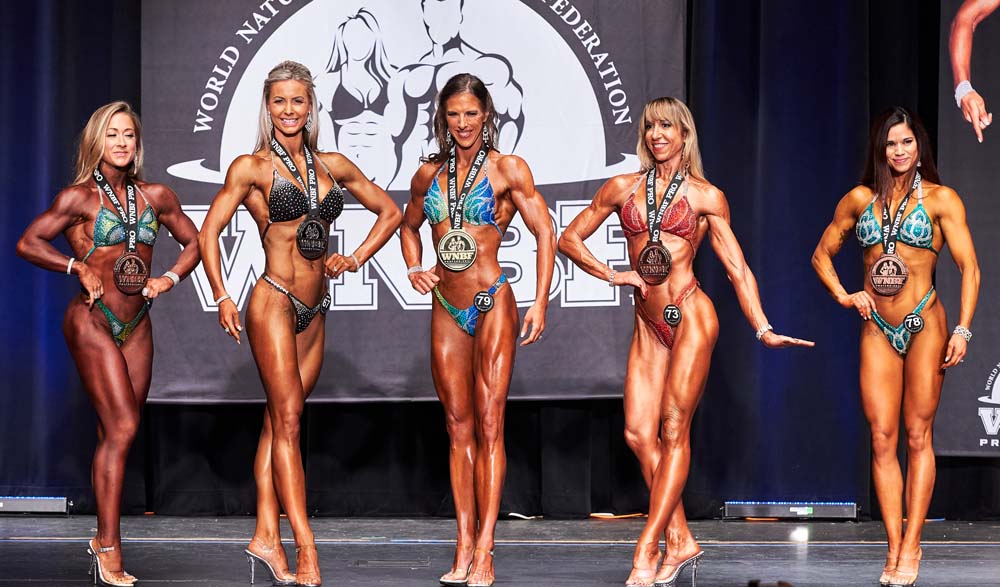 The WNBF Pro Figure tall class was next to stage with tons of talent. Chrissy Zmijewski of the USA has been competing as a Pro for over ten years, and she showed that even someone at her high level can improve. Chrissy had the best condition by far of all figure athletes, and she did not leave any details out of this prep – her suit, her tan, her make-up and her posing. She nailed it and won the class. In second, Laura Muncey of Australia used her great structure and tiny waist to solidify the runner-up spot. Annalisa Ghirotti of Italy is no stranger to the Worlds stage either, and she has made it into the top five many times. This year, third place was definitely hers as Annalisa really hit her best condition. Making her World Pro debut, Shannon Kelly of New Jersey USA survived over 24 hours at the airport the days before the show. She still managed to finish fourth in this tough class with big delts, and a big smile. USA‘s Regina Lewis, the 2015 WNBF Pro World Champion, finished fifth in this stacked class. 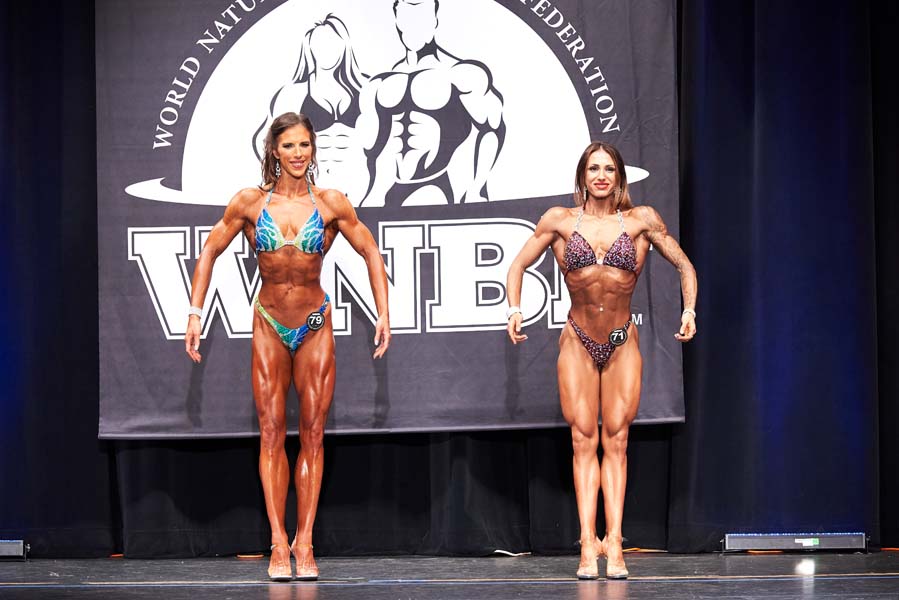 The Pro Figure overall was spectacular. In a split vote, Lucrezia Sonzini prevailed and was awarded the Worlds Pro Figure Overall title. The judges struggled with this one because both competitors are incredible champions.

Shifting gears, we moved onto Pro Men’s Physique. This class has experienced such fast growth that we were able to offer two height classes for the first time in the history of the WNBF. The Short class had our 2015 World Champion, David Galan of the Faroe Islands, and our 2017 reigning World champion, Cosimo DeAngeles of Italy competing against each other, along with many 2018 WNBF Pro Physique title holders. David Galan was On – he did not miss a detail and was well prepared and the most complete package displaying excellent posing to win the class. There was a tie for second, and Massimo Brunaccioni of Italy was just a bit sharper to edge out Cosimo DeAngeles who finished third. Cosimo’s physique is outstanding, so that is the depth of WNBF Pro Men’s Physique. Marcus Ames of New York USA showed his best physique to date, and it was good enough for fourth place. And another Itali